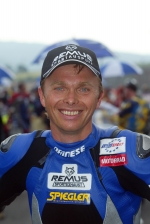 Jürgen Fuchs was born on 28th November 1965 in Pfaffenhofen and started relatively late with racing. In 1994 he made his debut at the German Grand Prix at the Hockenheimring in the 250cc class. In his first World Cup, Fuchs was 18 and missed the points. Fuchs was to have four more Grands Prix '94, before he entered the World Cup a year later.

In his first full season in the four-league World Championship, Fuchs scored his best results in Argentina and Catalunya with the eighth place finishes. A year later, further success should be added. At the Grand Prix of the Netherlands in Assen, Fuchs was on a World Championship podium for the first time on 29 June 1996 - behind his team colleague Ralf Waldmann and before a certain Max Biaggi. On the Nürburgring, the A1-ring and in Rio de Janeiro third places came. The season ended Fuchs as fourth - behind world champion Biaggi, Waldmann and Olivier Jacque.

A year later, the rise to the royal class of the 500cc two-act. A sixth place in Brazil should be the best result of Fuchs on the ELF 500. In 1998, the German returned to the 250cc class and took his last of a total of five GP podium finishes in Assen. He finished second behind Valentino Rossi and ahead of Haruchika Aoki. A fall ended the season and also the GP career of Jürgen Fuchs prematurely.

Fuchs initially wanted to end his Motobike career, but after a while his "drive" came back and became a permanent part of the GP Racing School. Fuchs has fought in his career with greats like Biaggi, Rossi and Co. - and he likes to share this experience with other motorbike rider.