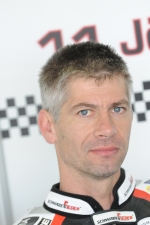 Jörg Teuchert should be a synonym for any sports motorbike fan. The sympathetic “Franke” was not only several times German champions in the most diverse categories, but so far also the only German Supersport World Champion.

Coming from Hersbruck, the passionate motorbike and mountain bike rider drove his first Enduro race in 1986. One of the greatest successes of his initial off-road career is probably the trophy in the classes up to 80cc and 125cc and the bronze medal at the Six-Days in Sweden 1990.
In World Supersport, Teuchert also made a fantastic debut. In the team of “Yamaha Motor Deutschland”, he won two victories in the first year (Albacete, Zeltweg), a third place (Kyalami) and a pole position (Nürburgring). Overall score 4 was the result.

The year 2000 should be the highlight in the career Teucherts - with all the ups and downs. A further pole position (Valencia) was added, along with six more pole positions. In Hockenheim and Sugo / Japan he could win, in Brands Hatch and Valencia there were second and in Misano as well as in Donington there were third places. In five of eleven races he drove the fastest race.

But the World Cup title was on shaky legs. In the third race of the season in Assen in the Netherlands, Teuchert finished third and disqualified. Next came the home race at Motopark Oschersleben. In the last round, the disaster happened: in the penultimate turn, his team colleague and countryman Christian Kellner kicked him off and both lay in the gravel. The dream of the title seemed to be dreaming. Stephane Chambon from France inherited the victory, Teuchert slipped to the third overall rank and traveled 17 points behind the final to Brands Hatch.

But there everything was to run for Teuchert. World Championship leader Chambon had to give up after only seven rounds with a technical defect, Christian Kellner operated "reparation" for the fauxpas of Oschersleben, when he overtook Paolo Casoli. Teuchert won the World Championship title with three points ahead.